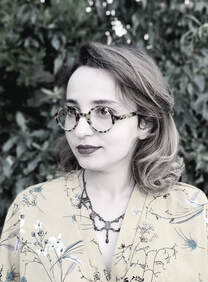 Born 1990, Tunis, Tunisia
​
Dorra Mahjoubi is born in Tunis in 1990. Her artistic academic studies started at the Institute of FIne Arts in Tunis in 2013 after a licence in social Law. She decided to join art studies. Dorra Mahjoubi attended Paul Valéry University in Montpellier France which permitted her to deepen her knowledge and obtain a Master degree in contemporary Art History. The Artist oriented her work towards political and social experiences. At a time when the feelings of urgency in the world - whether climatic, migratory, or the of identity, she choses a global citizenship and refuted any notion of a political frontier to better question the intimate borders that live inside the persons subjected to the process of emigration-immigration; for, as she affirms with conviction, "to take root on either side of the sea is to constantly face the absence, to accept to be built in silence. It is to exist paradoxically twice and only exist as a half ". Dorra’s work project aspires to be developed between the two shores of the Mediterranean. Dorra is also a poet and a singer. Since she defies borders, there is no limit to her artistic expression. Her early  works question the origins of life and the elements. The creative energy innate in women has always been her central subject since the start. In portraits or in material, women are always honored.
Back to Artists