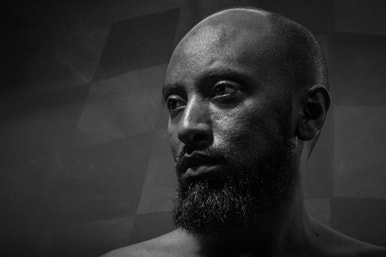 Born 1992, ​Addis Ababa, Ethiopia
​
I am Kirubel Abebe, a figurative painter who is based in Addis Ababa. My interest in art started hatching when I was a little kid. Being born in a planet where art is as ubiquitous as air, it was inevitable that I would eventually run in to it and have a whiff of its freshness. And I did. Since then, it developed to a hobby, an addictive habit, of copying pictures and portraits from books and magazines. From that point on, it became an obsession, so I enrolled at Alle school of Fine Arts, which is the only major art school in Ethiopia. Through those four year, I began a journey of self-discovery. That’s when I knew I was born to paint. I can say my time in the school added an enormous value to my works; process of thinking and creativity.

After finishing my BFA in panting I spent a brief time in the studio meditating through art, thinking critically and repenting through painting. Since then, I have been involved in multiple exhibitions, ranging from personal projects to collaborative shows where my paintings were showcased. In addition to that I have also been active internationally, participating in a workshops and art fares in Africa. As an observational artist who has been indulging in various explorations, where creativity is the imaginative ship sailing forward to self-discovery, I have been in quest depicting humans beyond the physical and been tending to focus more on the intrinsic side, one that’s more felt than seen or touched. Through this critical analysis of societal roles, and by observing human’s temperament, behavior, ego character, fear, emotions and their bond to taboos and customs, I laid the seeds of my art.
Back to Artists